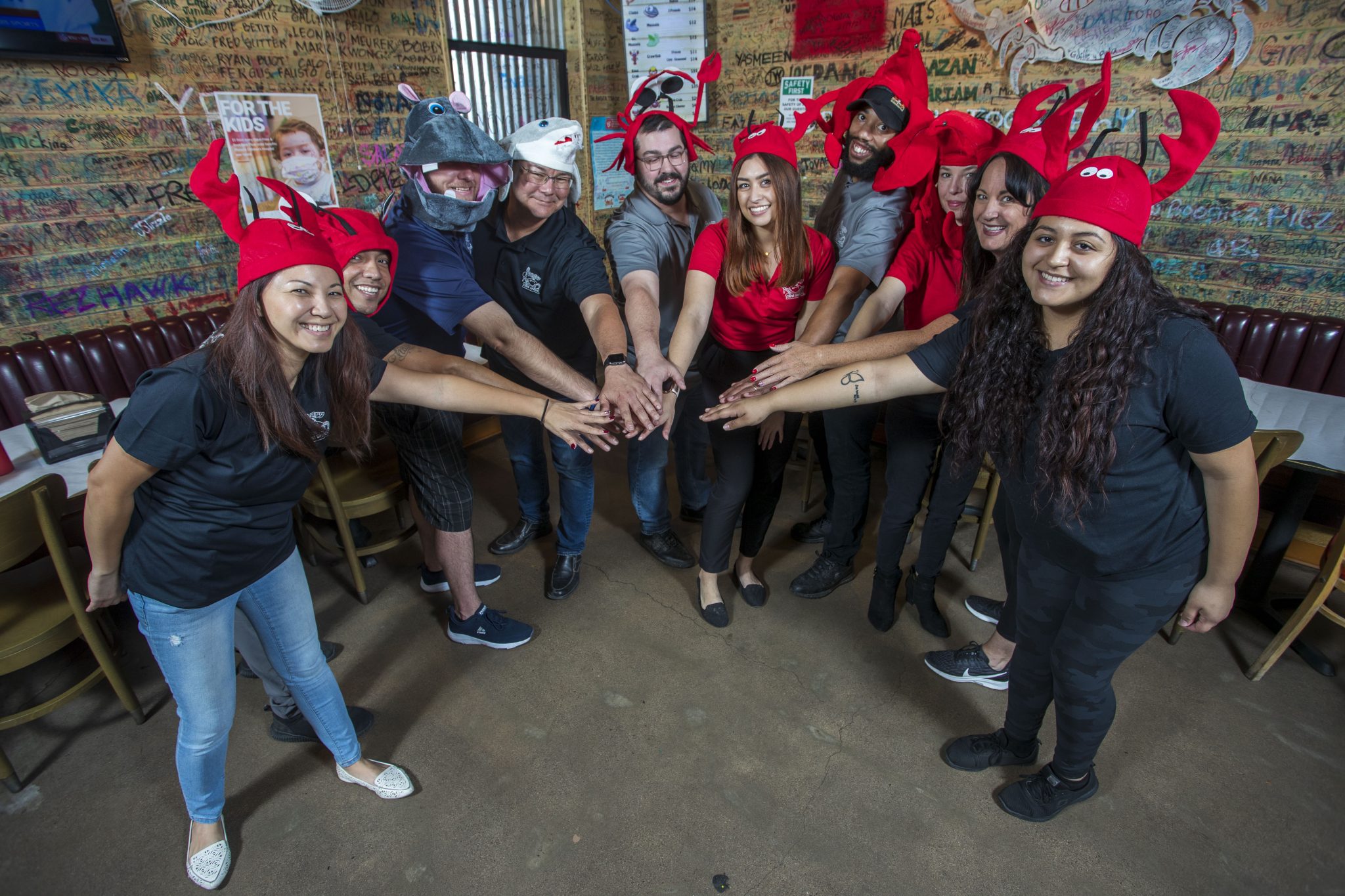 Angry Crab Shack, a Mesa-based chain of seafood restaurants, was one of the many hospitality businesses to take a big hit during the Covid-19 pandemic as indoor dining options shuttered.

At the Crab Shack, where customers typically gather around family style to eat a bevy of seafood dishes, revenue dropped by as much as 25% in 2020.

The pandemic pause forced the Angry Crab Shack team to reevaluate its operations, which chiefly manifested as an expansion of its to-go offerings.

Embracing to-go food has helped Angry Crab Shack get revenue back up to pre-pandemic levels and even past the levels the company saw in 2019.

The Angry Crab Shack took those business gains and returned part of the good fortune back to the community, making the company the 2021 winner of the Community Impact honors at the Phoenix Business Journal’s Arizona Corporate Excellence Awards.

“When we expand, to us, so should our commitment to the community and that’s why we upped our donations,” Diamond said.

The Angry Crab Shack has two main philanthropy programs. The first, put on during the month of July each year, is called “You Dine, We Donate.” As part of this promotion, the company donates 25 cents to the Arizona Housing Coalition for each customer that eats at the Crab Shack.

The Housing Coalition works with people experiencing homelessness and Diamond said the Crab Shack specifically has an interest in helping unhoused military veterans.

Angry Crab Shack’s second, more extensive community impact program is through its work with Phoenix Children’s. In 2017, the restaurant group changed the name of its Cajun fries to “Phoenix Children’s Hospital Fries” and now, any time a customer buys an order of fries, the company donates a dollar to the hospital. The company also makes a donation to the hospital any time a customer orders a root beer float.

Since 2017 the Angry Crab Shack has donated nearly $196,000 to the Arizona Housing Coalition and more than $447,000 to Phoenix Children’s. In addition to those two main charitable giving efforts, the company has worked with local food banks during the pandemic and youth sporting leagues.

Diamond said that all told, the Angry Crab Shack corporation is on track to donate a combined $1 million to charities by next year.

The Angry Crab Shack currently has 13 restaurants operating in Arizona, most of which are in the Valley, plus one in Henderson, Nevada and one in Orange Beach, Alabama. The company is also expecting to open branches in Casa Grande, Prescott, Tucson as well as in Georgia, Illinois, Texas and Florida.

Franchising opportunities are available for people interested in running their own Angry Crab location, but Diamond said that when he and founder Ron Lou meet with prospective franchisers, they have special requirements they must adhere to.

“When franchises come on board, those are the two main things that we want them to do. We want them to do a July promotion to find a local charity that helps veterans and we want them to find a children’s hospital in the area to do the same type of promotions,” Diamond said. “We make sure that they understand that those two are requirements.”

Diamond said the Angry Crab Shack is a fun place to eat for all occasions, but it’s perhaps particularly good for those in a budding romance.

“It’s been voted, at one point, best third date restaurant because you can actually see how comfortable your date’s going to be with you eating with your hands and wearing a bib,” Diamond said.