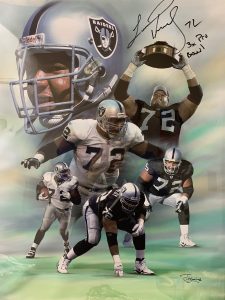 After 12 years in the NFL and a successful co-hosting gig at Fox Sports Radio, opening a restaurant franchise may not have seemed like the natural next step for Lincoln Kennedy.

When Lincoln first learned about Angry Crab Shack, he listened to its benefits straight from the founder’s mouth.

Angry Crab Shack Founder Ron Lou is also a former NFL player, and he and Lincoln were longtime friends before Lincoln opened a franchise with the brand. The two met ten years ago, while Lincoln was the president of the NFL Association.

“When Ron opened his first Angry Crab Shack, he wanted me to get in on the ground level,” Lincoln recalled. “The brand has now been around for nearly six years, but I’m very excited to be one of the first franchise owners and see firsthand Angry Crab Shack’s unit-level and brand-wide success.”

Kicking Off the Business with a Bang

This January, Lincoln opened his first Angry Crab Shack franchise in Happy Valley, Arizona. Although he is only a few months into the business, Lincoln saw the advantages of the on-trend, high-demand concept as soon as he opened his doors.

“Part of what was so appealing about the Angry Crab Shack opportunity was how much demand is out there for restaurant concepts like these,” Lincoln said. “There’s always a draw for seafood, and after bringing in almost $100,000 in net sales every week for the first several weeks, I’ve seen firsthand how strong that demand really is.”

The Strong Location Strategy That Doesn’t Run out the Clock

High consumer demand is one of Angry Crab Shack’s greatest differentiators, but the brand’s simple model and commitment to high ROI are also behind franchise owners’ success.

Investing in second-generation real estate is one way the Angry Crab Shack corporate team is able to control initial franchise costs, while maximizing their investment and expediting the opening process.

“The Happy Valley location was actually a different restaurant before it went on the market, so it had the right size, layout, design and even some built-in kitchen equipment we needed for the restaurant,” Lincoln said. “That saved a lot on initial expenses, and the total cost to open – including inventory, working capital, franchise fee and training payroll – was substantially lower than the net sales I made just after the first month since opening.”

Not only was the Angry Crab Shack site selection strategy more cost-effective, it also cut down on the time it took to open the restaurant.

The timeframe between a restaurant’s build-out and opening depends on a multitude of different factors, but it can easily take a year or more. However, Lincoln opened his restaurant for business just four months after signing his lease.

“The location strategy at Angry Crab Shack is second-to-none, and it’s completely developed with the franchise owner in mind,” Lincoln said. “By minimizing startup time, and avoiding unnecessary costs, you’re able to open your doors sooner and make a higher return on your investment, faster.”

A Game Plan for Future Growth

Lincoln has hit the ground running with his franchise, and he has already seen impressive demand and ROI for his Happy Valley location. After the success of his first Angry Crab Shack, Lincoln plans to open several more franchises in the Arizona region, and later, move Angry Crab Shack to other states.

“I am enjoying getting a hands-on feel for the business and seeing the investment and its returns firsthand,” Lincoln said. “Ultimately, my end game is to expand my footprint across the state and bring the concept to other areas like Nevada and California as well.”